In October 2015, our team delivered a research talk for the Department of English at the University of Calgary. In this talk, we introduced the English faculty and students to the research questions and developments in the Digital Dinah Craik project and gave a light introduction to our project’s TEI markup. To prepare for our presentation, I created three preliminary visualizations with Google Fusion Tables. Using data from our project’s excel spreadsheet—which details the locations, contexts, and contents of each manuscript letter—I created one network graph and two maps to accompany our oral presentation:

This map shows the archival institutions that currently house Dinah Craik’s manuscript letters. So far, our TAPAS page includes TEI letters from the Morgan Library in New York, the Princeton Parrish Collection, and the Mulock Family Papers at the University of California at Los Angeles. We also have material from European institutions such as Oxford University and the National Library of Scotland. Digital Dinah Craik is the first scholarly project in which Craik’s manuscript letters have been synthesized and studied together as a whole. 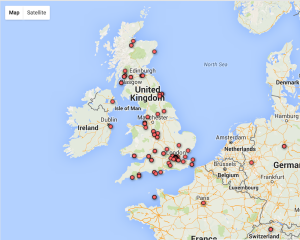 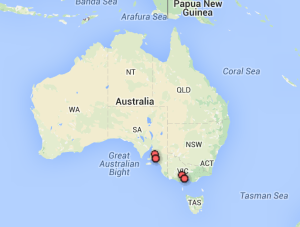 This map roughly shows some of the locations where Dinah Craik’s letters were written and received. Craik spent most of her working life in London but she often travelled to visit family and friends across England, Scotland, and Ireland. As we gather more specific information about the place names mentioned in Dinah’s letters, this map will grow extensively. She frequently wrote to American publishing firms such as Harper’s and Ticknor & Fields, and she often exchanged letters with her brother Ben, who travelled to Australia, Brazil, and the Crimea during his lifetime. 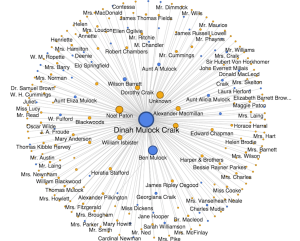 To construct this network graph, I isolated all the manuscript letters that were sent by and received by Dinah Craik. The blue nodes represent senders and the yellow-orange nodes represent recipients. When a person is both sender and recipient of numerous letters, Good Fusion Tables groups that person together with the blue nodes. The yellow-orange nodes closest to the centre represent the people who Dinah Craik wrote to the most often (or rather, the most frequently occurring recipients in the archives). This graph shows that most of Dinah Craik’s surviving letters were addressed to British publishers such as William Isbister, Edward and Frederic Chapman, and Alexander Macmillan, and she exchanged many letters with her brother Ben Mulock.